Haryana Police partnered with cops from Mumbai and Bihar to make the arrests. (Representative Photo)

The seven men arrested from Mumbai and Bihar for threat calls to four legislators in Haryana belong to a gang of extortionists and fraudsters with links in Pakistan and West Asia, and sent at least Rs 2.7 crore to Pakistan in the last eight months, police today said . Some politicians in Punjab and Delhi had also received threats from them.

Initially these calls in June were being linked to gangs behind the murder of Punjabi singer Sidhu Moosewala — also because some of the callers spoke in Punjabi and said “you’ll meet the same fate as Moosewala”. Police have not spoken of a link, but said these common used such recent crimes to scare people into giving them money.

These men not only made extortion calls but also duped some people into believing they’d won lotteries or contests such as ‘Kaun Banega Crorepati’, to get them to transfer money into bank accounts, police have said. They paid poor people to open accounts in their names, which they used to receive the money.

In the last eight months, 727 bank accounts in Bihar were used for receiving the money, said Sandeep Dhankhar, an officer of Haryana Police’s Special Task Force (STF), in Sonipat today.

To their associates in Pakistan, they allegedly sent money through the ‘hawala’ route, which means it was paid to someone here, who then arranged for a similar amount to be paid to the gang members in Pakistan — not needing to move the money physically across the border. 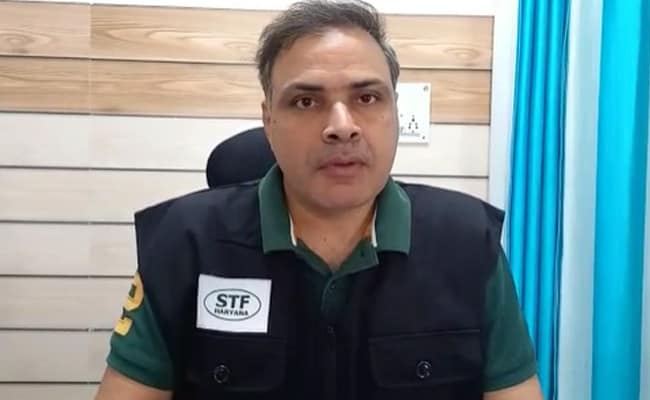 The STF said after six arrests in July that the extortionists aren’t linked to any terror organization but were simply using these means to take money out of India.

Two members of the gang — Dulesh Alam of Bihar, and Badre Alam of Uttar Pradesh — were arrested from Mumbai. The other four — Amit Yadav, Saddiq Anwar, Sanoj Kumar, Kaish Alam, all natives of Bihar — were arrested from the state’s Muzaffarpur, according to Inspector General of Police (IGP) Balan.

Another man from Bihar, Abulesh Alam, was arrested recently.

In the extortion calls to the MLAs — between June 24 and 28 — “different tones and conversational styles, like Mumbai slang or sometimes Punjabi, were used during these conversations with the MLAs,” police said. On the MLAs’ complaints, the Haryana police chief formed the STF.

This team partnered with central agencies, besides police from Mumbai and Bihar, to crack the case and make the arrests. Numbers used for the calls to MLAs were traced to West Asian countries, which were being operated from Pakistan, STF chief Satheesh Balan told the media on July 31.

Some cops became decoy targets by managing to come on “the gang’s radar”. After getting extortion calls, they noted down their particulars, such as bank accounts details, after which raids were held in Mumbai and Muzaffarpur simultaneously, IGP Balan told reporters.

The STF learn about 10 Pakistan residents through whom the threats and extortion calls were routed, he said.

The Haryana STF was headed by Superintendent of Police (SP) Sumit Kuhar, along with Sandeep Dhankhar and Surendra Kinha, both deputy SPs.