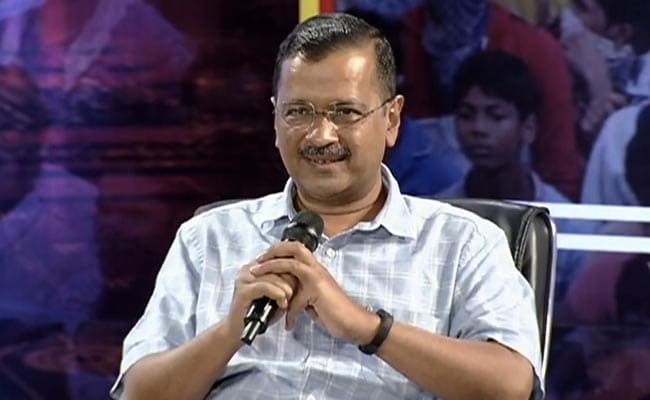 Arvind Kejriwal spoke on a number of issues at the NDTV Townhall.

Delhi Chief Minister and AAP national convenor today slammed the BJP, Rahul Gandhi and said that India should be “building schools and hospitals rather than political alliances” in a wide-ranging interview to NDTV.

Here are the highlights from Arvind Kejriwal’s interview at a special NDTV townhall.

On the ‘Make in India’ campaign

People are angry, impatient. 75 years of independence, why are we so behind others?

Indians are most hardworking, intelligent. So why are we lagging behind?

We have the best professionals. People now want to move forward. If we leave India to these parties, it will take India another 75 years to move ahead.

Every day we hear about MLAs being bought. This is our money they are spending to buy MLAs.

They are waiving loans of businessmen. But students are struggling to pay EMIs. They have only thought about themselves.

We need an alliance of people, youth.

Most important for India is education. Delhi government school kids are getting into IITs. A security guard’s son got the same rank in JEE as I did. His starting salary will be Rs 2 lakh. If we can do this for all kids, there will be no poverty in India.

Everyone should get free education, healthcare. We have done it in Delhi, why not in India?

The third thing we need are jobs.

The fourth thing we need is infrastructure.

On how other states can improve

To fix schools, we need good intent. In Punjab, we have made 100 mohalla clinics. Power is free and we have improved government schools’

On how he talks a lot about what he does

Sure we will publicize, why not? If I’m doing good work, why not publicize? Others publicize without doing anything

On what is needed for making India no. 1

In Barmer, a doctor had a problem finishing MBBS. So now he gathers 50 kids every year and gets them admitted for MBBS. We need more people like that.

On Alliances and Coalition

I’m not against anyone. But I don’t understand this jor-tor politics.

If 130 crore people come together, all governments will have to work.

Now there is just too much negativity. If all come together, India will be no. 1.

On how this will happen – will he become pm?

People will decide how we will move forward. But I know what to do. We have to fix schools, healthcare, unemployment.

We have been robbed for 75 years. They have filled their coffers. People will not tolerate any more.

India will not be no.1 due to speeches. Unless every child is educated, India won’t be no.1.

They ask other countries for technology. Why don’t they give our scientists a chance?

Does congress need me to weaken them? Isnt rahul gandhi sufficient?

On if he is also going to temples now

On raids, corruption in his government

Did CBI get anything from Manish Sisodia? What is the excise scam exactly. Ask bjp leaders, what is the scam

Alleged scam is worth more than Delhi’s budget. They are just throwing muck. They won’t even arrest Sisodia.

If there is corruption, arrest. Don’t do this drama all day and divert attention.

I got an audio clip on my minister. I removed minister, sent clip to CBI. So they know, we will punish even our own. I have sent my own minister to jail. But all this baseless muck is useless

Who is stopping them from arresting Sisodia? No probe, no arrest, only muck. India will never move ahead like this. We need positivity.

None of these are mentioned in the CBI’s FIR. They have investigated everything about us. They have found nothing.

Whatever we do, they investigate. What’s happening in Satyendar Jain’s case? Now they are saying they want to change the judge. They said this judge asks too many questions.

They have frightened officials. We have the same excise policy in Punjab. We have plugged all loopholes, no leaks.

In Delhi, officials didn’t want to extend it. We had to go back because they didn’t let us implement it. We don’t have a full government in Delhi.

On how they managed to put focus on education

I saw Amit Shah going to schools in Gujarat. I think it was the 1st time in 27 years that their leaders are talking about schools. I am glad we forced Amit Shah to visit schools. Discourse should be on education, on healthcare.

On autowallas
Delhi autowallas helped a lot in AAP’s first elections. They put up our posters for free.

There are 2 kinds of politics – one is for people, the other is for self.

I stopped all corruption. I used all the money for schools. Is all this a crime?

Now no money in Swiss banks. We have free healthcare. Is all this a crime?

On why India is not doing well in sports

This country has a lot of talent. I have seen kids who somersault at traffic lights? What flexibility!

Let each state focus on two sports. We will get 100 medals then.

There are 2 important issues about women – One is security, one is participation in economy. We need both.

Women’s security is very important. I wish Delhi Police was under us.

We have done what we could. We have put up huge street lights, CCTVs. We have the most dense network of CCTVs in the world.

Punjab will soon become the safest place. We have to give women equal chances. Need them in every sphere. Need women to be no. 1.