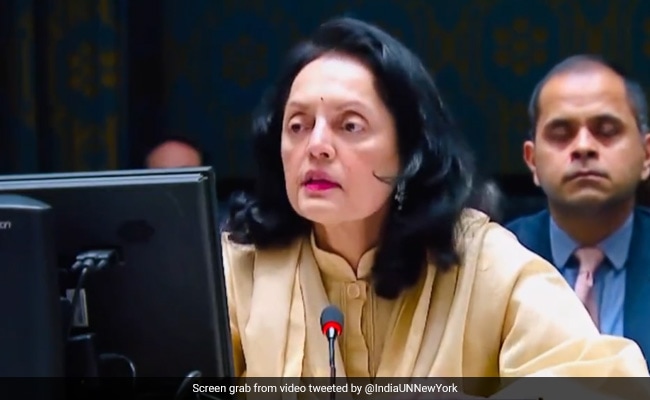 North Korea’s missile tests affect the peace and security of the region and beyond, India said at UN.

India’s Permanent Representative to the UN, Ambassador Ruchira Kamboj said that the recent intercontinental ballistic missile (ICBM) launch by the Democratic People’s Republic of Korea (DPRK) “affect the peace and security of the region and beyond.”

Incidentally, this was the second meeting on DPRK after Pyongyang fired an intercontinental ballistic missile. The isolated country fired an intercontinental ballistic missile (ICBM) toward the East Sea last Friday, the South Korean military said, in protest over the United States move to reinforce its “extended deterrence” protection of South Korea and Japan.

Attending the site with his daughter and wife, Kim said threats from the United States and its allies pursuing a hostile policy prompted his country to “substantially accelerate the bolstering of its overwhelming nuclear deterrence,” reported The Jerusalem Post.

“Kim Jong Un solemnly declared that if the enemies continue to pose threats … our party and government will resolutely react to nukes with nuclear weapons and to total confrontation with all-out confrontation,” the official KCNA news agency said.

The launch is presumed to have involved the Hwasong-17 ICBM, according to Yonhap, the same ICBM was test-fired on November 3, but the launch was seen as a failure.

The launch of the Hwasong-17 ICBM was confirmed by the north and was part of a “top-priority defense-building strategy” aimed at building “the most powerful and absolute nuclear deterrence,” KCNA said, calling it “the strongest strategic weapon”. in the world.”

The Hwasong-17 ICBM was called a “monster” of a missile for its sheer size. It is capable of carrying multiple warheads and has a range of around 15,000 km, according to North Korea, long enough to reach the entire US mainland, reported The Jerusalem Post.

She further called for full implementation of the relevant UN Security Council relations, relating to the DPRK.

“We would also like to reiterate once again the importance of addressing the proliferation of nuclear and missile technologies related to the DPRK. The proliferation of nuclear and missile technologies is a matter of concern, as they have an adverse impact on peace and security in the region, including India. We hope that the international community and the Security Council can be united on this front,” said the Indian envoy.

“Ensuring peace and security in the Koran peninsula is in our collective interest, going forward we will continue to support dialogue and diplomacy as the means to resolve the issues in the peninsula,” she added.