For Congress March, Rahul Gandhi Has Private Container, Others 2-12 Beds

The Congress Bharat Jodo Yatra is using 60 such containers.

Among some 230 people part of the Congress’s ‘Bharat Jodo Yatra’, senior party leader Rahul Gandhi is spending his nights on in one of the 60 containers mounted on trucks that are being moved daily from one place to another.

While the 52-year-old MP has one of the air-conditioned containers to himself, others will be sharing. Senior leaders are housed in two-bedded containers and others yatris in six or 12-bedded ones. Not all containers have ACs, but most have attached toilets. 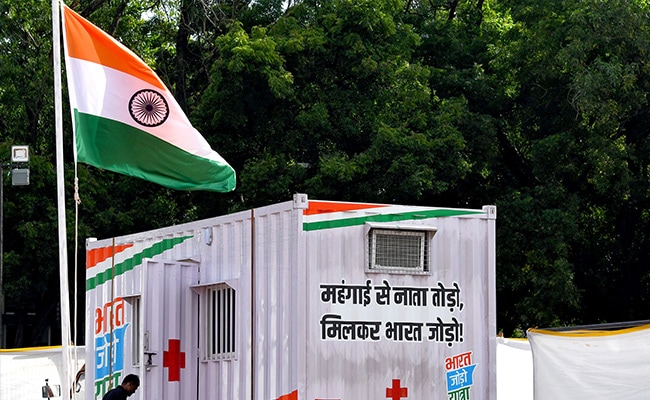 The containers are being moved on trucks along with the march.

Party leader Jairam Ramesh has told reporters that the containers, which will be stationed every night at temporary campsites of about two acres, don’t have provisions for food or meetings. There is no TV inside, there is a fan, he said.

There are 119 “Bharat Yatris”, including Rahul Gandhi, who will walk the entire distance of 3,570 km, from Kanyakumari to Kashmir, along with some “Atithi Yatris”, will be staying in the containers, Mr Ramesh said.

Rahul Gandhi is among some 230 people who are part of the march.

“We are staying in the containers since yesterday. There are 60 containers in which about 230 people stay. Every day the containers will move to a new site mounted on trucks. Some are one-bed, some two-bed, some four-bed and some 12-bed containers,” Mr Ramesh said.

Rahul Gandhi is also staying in the container since Wednesday night, he said. On the first day of the march on Thursday, the yatris covered some 23 km with one break.

Some of the containers have air conditioners.

Party leader Digvijaya Singh, who is the chief of the Bharat Jodo Yatra organizing panel, said the containers are like railway sleeper compartments.

According to Mr Ramesh, the containers are mounted on Tata trucks that are from Mumbai. They are from a private company.

The “Bharat Yatris” have also been issued standard khadi bags, which have a water bottle, an umbrella and a pair of T-shirts.

The march will cover 12 states and two union territories in 150 days.