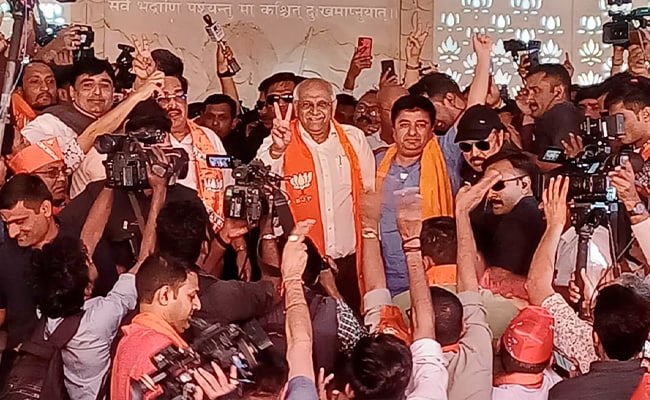 The BJP’s seventh term in power in Gujarat will begin today with a grand oath ceremony for Chief Minister Bhupendra Patel, who had replaced Vijay Rupani in September last year, ahead of the elections in the state. Around 25 cabinet ministers will also take an oath with him. Contrary to concerns about growing anti-incumbency, the BJP had achieved a landslide victory in Gujarat – winning 156 of the state’s 182 seats and 53 per cent vote share.

Detailed preparations have been made in terms of infrastructure and the ceremony, sources said. The helipad in Gandhinagar—the site of the oath ceremony—will have three massive stages. The middle platform will be for the Chief Minister and his cabinet.

The platform on the right of the main stage will accommodate the Prime Minister and VVIPs. The one on the left will seat 200 sadhus from the state, who have been specially invited for the ceremony.

Sources said the audience will include members from all communities, but Patidars, Other Backward Classes, Scheduled Castes and Tribes and women will be given priority. Preferences have been given keeping the 2024 Lok Sabha and then 2026 state elections in mind, sources indicated.

The BJP has made vast inroads among the Scheduled Castes and Tribes – traditionally a Congress bastion, in this election. But Arvind Kejriwal’s Aam Aadmi Party — which opened its account in the state this time — has also managed to create pockets of influence.

The Patidars, traditional supporters of the BJP, had been upset with the party. But with Hardik Patel changing camp from the Congress to the BJP, the party is trying not to rock the boat. Hardik Patel has won this time from the Viramgam constituency, beating Congress’s Lakhabhai Bharwad by over 50,000 votes.

The unprecedented BJP sweep has pushed the Congress and Arvind Kejriwal’s Aam Aadmi Party to the sidelines. The Congress — which gave the BJP a scare in 2017 with 77 seats and confined the party to only 99 — won only 17 seats this time.

Watch: PM Modi Spotted A Dhol Player At Nagpur Event. Then This Happened