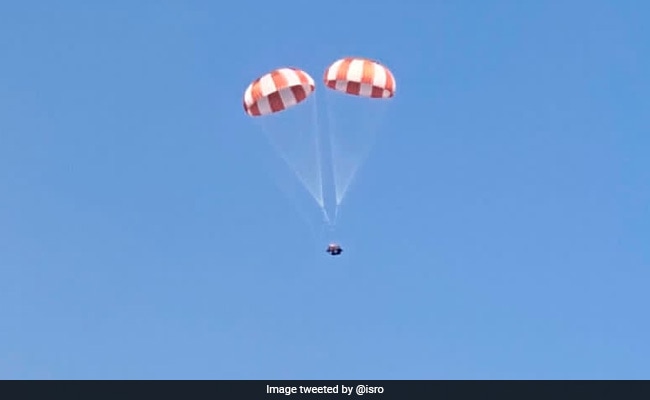 Senior ISRO and DRDO scientists and air force officers were present when the crucial test was done.

The IMAT conducted on Friday marks a significant milestone towards realizing the nation’s ambitious Gaganyaan project, the Indian Space Research Organization (ISRO) said in a statement.

The Gaganyaan deceleration system consists of three main parachutes, besides the smaller ACS, pilot, and drogue parachutes, to reduce the speed of the crew module to safe levels during its landing, the space agency said.

Two of the three main chutes are sufficient to land the astronauts on earth, and the third is redundant, ISRO said adding that the IMAT test simulated the case when one main chute failed to open.

The IMAT test is the first in a series of integrated parachute airdrop tests planned to simulate different failure conditions of the parachute system before it is deemed qualified to be used in the first human spaceflight mission.

In this test, a five-tonne dummy mass, equivalent to the crew module mass, was taken to an altitude of 2.5 kilometers and dropped using the Indian Air Force’s IL-76 aircraft. Two small pyro-based mortar-deployed pilot parachutes then pulled the main parachutes.

The main parachute sizes were initially restricted to a smaller area to reduce the opening shock. After seven seconds, the pyro-based reefing line cutters cut the area restricting line, allowing the parachutes to inflate fully.

“The fully inflated main parachutes reduced the payload speed to a safe landing speed. The entire sequence lasted about 2-3 minutes as the scientists watched the different phases of the deployment sequence unfold with bated breath. There was loud cheer and applause as the payload The mass landed softly on the ground and the gigantic parachutes collapsed,” the statement read.

The design and development of the parachute-based deceleration system is a joint venture of ISRO and the Defense Research and Development Organization (DRDO).

Senior ISRO and DRDO scientists and air force officers were present when the crucial test was done.

“Besides proving the caliber of the scientists of ISRO and DRDO, the test also demonstrated the active coordination between the country’s premier agencies, namely ISRO, DRDO, the Indian Air Force, and the Indian Army,” ISRO said quoting a senior official.

On Viral Video Of Delhi Minister Getting Massage In Jail, AAP vs BJP