Over 67,000 Cattle Died So Far By Lumpy Virus In India: Government 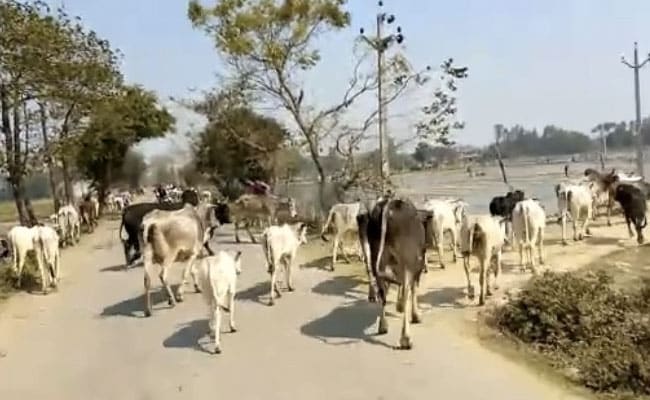 India had a cattle population of 192.5 million in 2019.(Representational)

The Center on Monday said over 67,000 cattle have died since the outbreak of the lumpy skin disease in July, prompting a massive effort to vaccinate cattle in over eight states with most cases of the disease.

The commercial launch of a new vaccine ‘Lumpi-ProVacInd’ for LSD, developed by two institutes of agri research body ICAR, will take the next “three-four months,” he said.

“In Rajasthan, the number of deaths is 600-700 per day. But in other states, it is less than 100 in a single day,” he said, adding that the ministry has asked states to accelerate the vaccination process.

According to Mr Swain, the goat pox vaccine is “100 per cent effective” and already 1.5 crore doses have been administered in the affected states.

He also said there is a sufficient supply of goat pox vaccine in the country. Two companies are manufacturing this vaccine and they have the capacity to produce 4 crore doses a month.

The total cattle population is around 20 crore. Already, 1.5 crore goat pox doses have been given, he said.

On the impact of LSD on milk production, the managing director of Gujarat Cooperative Milk Marketing Federation (GCMMF), which markets dairy products under the Amul brand, RS Sodhi said there has been a marginal impact of 0.5 per cent on milk production in Gujarat.

The situation in Gujarat is under control because of the vaccination process, he added.

Mr Sodhi said the impact could be a little higher in other states. “The procurement of organized milk producers including Amul has gone down compared to the year-ago period. But this cannot be attributed to LSD. Unlike last year, unorganized players, sweet makers and hotels are aggressively procuring milk,” he said.

Mother Dairy MD Manish Bandlish said, “There is a minor impact on production in the overall scheme of things.” LSD entered India, Bangladesh and China in July 2019. Lumpy skin disease (LSD) is a contagious viral disease that affects cattle and causes fever, nodules on the skin and can also lead to death. The disease gets spread by mosquitoes, flies, lice, and wasps by direct contact among the cattle, and through contaminated food and water.

India, the world’s largest milk producer, had a cattle population of 192.5 million in 2019, as per the 19th Livestock census.