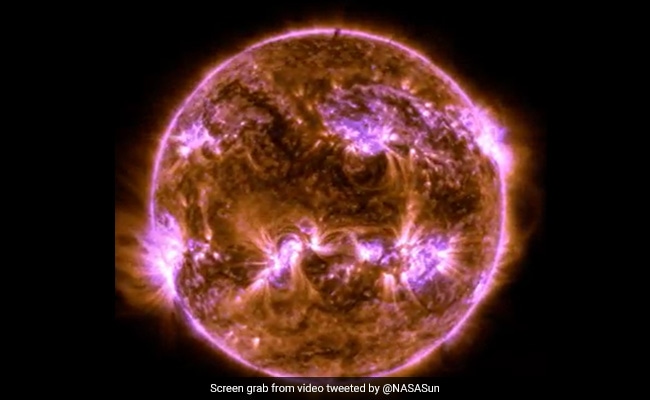 The most powerful ones – like the latest event – are known as “X-class” flares.

A strong solar flare struck the Earth on Thursday and caused a shortwave radio blackout over a large area of ​​the South Pacific, including Australia and New Zealand. The American space agency NASA informed that the “X-class” solar flare was spewed out by a newly emerging sunspot identified as AR3182. The outburst blasted out a glowing-hot plasma dome that lingered above the sunspot for over an hour.

In a Twitter post, NASA Sun & Space shared a GIF (graphics interchange format) of the event and wrote, “The Sun emitted a strong solar flare on Jan 5, 2023, peaking at 7:57 pm ET. NASA’s Solar Dynamics Observatory captured an image of the event, which was classified as X-class.”

Take a look below:

The Sun emitted a strong solar flare on Jan 5, 2023, peaking at 7:57 pm ET. NASA’s Solar Dynamics Observatory captured an image of the event, which was classified as X-class. https://t.co/fDYUDg57T0pic.twitter.com/njXe8ZJGMH

“Solar flares are powerful bursts of radiation. Harmful radiation from a flare cannot pass through Earth’s atmosphere to physically affect humans on the ground, however – when intense enough – they can disturb the atmosphere in the layer where GPS & communications signals travel,” the National Aeronautics and Space Administration (NASA) explained in the following tweet,

according to NewsweekSolar flares can be classified according to their strength. The most powerful ones – like the latest event – are known as “X-class” flares, while the weakest are categorized as “A-class”. Within each class, solar flares are also categorized using an even more detailed scale of strength that runs from 1 to 9.

In a press releaseNASA stated that Thursday’s solar flare was rated “X1.2” on the scale, meaning it ranks among the most powerful flares that the sun produces.

According to the National Oceanic and Atmospheric Administration’s Space Weather Prediction Center (SWPC), “large portions” of the sunlit side of the Earth—which at the time included the South Pacific region—were affected by the radio blackout. This possibly led to widespread signal degradation and loss of contact for up to an hour. SpaceWeather.com reported that the primary impact of Thursday’s solar flare was on high-frequency radio communications, which may have been noticed by ham radio operators, mariners and aviators.

Meanwhile, according to CNET, scientists believe there is surely more in this sunspot’s arsenal. “Given the size and apparent complexity of this large active region, there’s a good chance the explosions will continue in the days ahead,” said former NASA astronomer Tony Phillips.

BAFTA 2023: RRR And All That Breathes On The Longlist