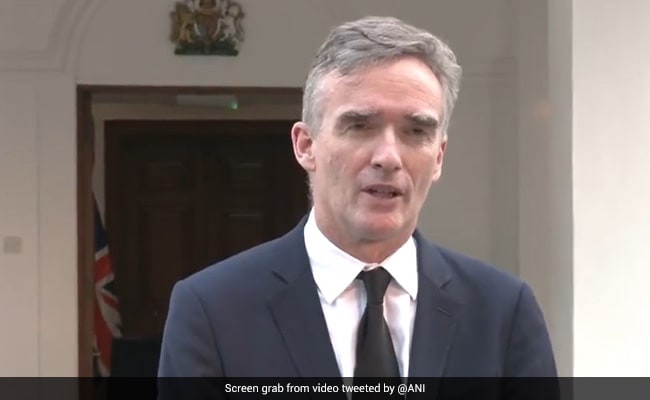 “The election of the first Hindu PM of Britain is a historic moment,” says Alex Ellis.

“The election of the first Hindu PM of Britain is a historic moment,” says Alex Ellis, British High Commissioner to India, in Hindi.

Envoy Ellis on Tuesday said that Rishi Sunak becoming UK Prime Minister is a sign of a “different United Kingdom that there is today” compared to the country in which he grew up. He said bilateral relations have been deepening and growing very fast since the UK left European Union.

“It’s a big day for the United Kingdom. We have a new Prime Minister. That Prime Minister is young. His grandparents came from India, his parents from East Africa and he’s a Hindu. This is a sign of the different United Kingdom that there is today compared to the country in which I grew up. So, it is quite a different country and it’s a big day to mark that,” Alex Ellis said in an exclusive interview with ANI.

“UK-India relations have been deepening and growing very fast since we left the European Union. That was the course set by Prime Minister Johnson with Prime Minister Modi through the comprehensive strategic partnership followed by Liz Truss and we’ll see what happens while we expect this government to pursue the same course as well,” he added.

Ellis said Prime Minister Rishi Sunak made it clear that the economy was going to be a top priority when he stood on the steps of Downing Street on Tuesday. He said the economy grows in various ways including through trade and investment. “India is a big investor in the UK, and the UK is a big investor in India. We want to double the trade by 2030.”

“A Free Trade Agreement(FTA) is an excellent way of doing that. It’s a long way to get to Free Trade Agreement. We’ve walked through the foothills, gone up the valley, and got to base camp and now we need to do this short and sharp ascent. I think both countries are determined to reach the summit,” the High Commissioner said.

“It takes two to tango. Negotiations going hard for under a year. It’s a short time for Free Trade Agreements but there’s a prize inside which is the strengthening of employment and growth in both countries. I think that’s what both PMs would want to achieve , he added.

India and UK were keen to conclude FTA by Diwali and negotiations are continuing between the two countries. Rishi Sunak on Tuesday became the UK’s first Indian-origin British Prime Minister after being invited by King Charles III to form a government. Sunak met the king at Buckingham Palace.

In his first address as the UK PM at 10 Downing Street, Rishi Sunak said that he will place economic stability and confidence at the heart of his government’s agenda. “This will mean difficult decisions to come,” Rishi Sunak said.

Talking about his predecessor Liz Truss, who resigned after being in office for 45-days, Rishi Sunak said, “She was not wrong to improve growth in the country. It is a noble aim. But some mistakes were made, not borne of ill will or bad intention, but mistakes nonetheless.”

Prime Minister Narendra Modi on Monday greeted Rishi Sunak following his election as leader of the Conservative Party and the next British Prime Minister.

“Warmest congratulations @RishiSunak! As you become UK PM, I look forward to working closely together on global issues and implementing Roadmap 2030. Special Diwali wishes to the ‘living bridge’ of UK Indians, as we transform our historic ties into a modern partnership ,” PM Modi said in a tweet.