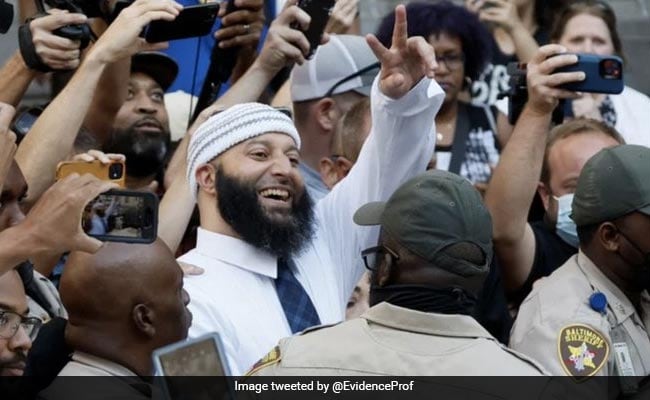 The state had also been awaiting the results of new DNA tests on Lee’s clothing. (File)

Prosecutors in the US city of Baltimore dropped charges on Tuesday against a man who served over two decades in prison for his ex-girlfriend’s murder – a case that drew worldwide attention thanks to the hit podcast “Serial.”

The Maryland public defender’s office said the state’s attorney had dropped murder charges facing Adnan Syed, 41, who had been serving a life sentence since 2000 for the 1999 murder of Hae Min Lee.

“We can confirm that the charges were dropped,” Tammy Jarnagin of the public defender’s office said in an email to AFP.

Mosby had asked the court to vacate Syed’s conviction while a further investigation into Lee’s murder was carried out.

“The state has lost confidence in the integrity of his conviction,” said assistant state’s attorney Becky Feldman. “We need to make sure we hold the correct person accountable.”

Feldman told the judge the decision was prompted by the discovery of new information regarding two alternative suspects and the unreliability of cell phone data used to convict Syed.

The state had also been awaiting the results of new DNA tests on Lee’s clothing before deciding whether to drop all charges or organize a new trial.

Prosecutors had 30 days to either bring new charges against Syed or dismiss the case.

Lee’s body was found buried in February 1999 in a shallow grave in the woods of Baltimore, Maryland. The 18-year-old had been strangled.

Syed has steadfastly maintained his innocence but his multiple appeals had been denied, including by the US Supreme Court which declined in 2019 to hear his case.

Syed’s case earned global attention when it was taken up in 2014 by “Serial,” a weekly podcast that saw a journalist revisit his conviction and cast doubt on his guilt.

It has also been the subject of a four-part documentary on the HBO channel called “The Case Against Adnan Syed.”

The “Serial” podcast — a mix of investigative journalism, first-person narrative and dramatic storytelling — focused its first season on Syed’s story in 12 nail-biting episodes.

Both Syed and Lee were high school honor students and children from immigrant families — he Pakistani, she South Korean — who had concealed their relationship from their conservative parents.

Prosecutors said during the trial that Syed was a scorned lover who felt humiliated after Lee broke up with him.