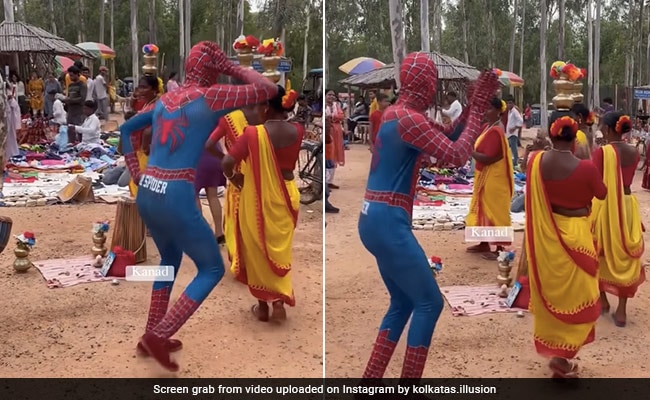 The video was recorded at a marketplace in Shantiniketan’s Sonajhuri.

A video of a man dressed as Spider-Man dancing at a marketplace in West Bengal has taken the internet by storm. The chip was posted by an Instagram influencer who goes by the name of Mr Spider.

The video shows the anonymous man dressed as the Marvel character dancing along with other Santhali women performing to folk music. According to the caption of the post, the clip was recorded at a marketplace in Shantiniketan’s Sonajhuri.

Watch the video below:

“@mrspider2014 is enjoying at Sonajhuri and vibing with shaotaal naach,” the caption of the Instagram post read.

Since being shared, the video has garnered more than 44,000 views and over 4,000 likes. It has left the internet in splits as netizens flooded the comment section with laughing and fire emojis. One user even wrote, “Made my day”.

Meanwhile, the internet is filled with hilarious content. A while back, a video of a beggar donning Captain Jack Sparrow’s outfit had also gone viral online.

The clip showed the man perfectly imitating the mannerism of Johnny Depp (who played the character in the Pirates of the Caribbean) while asking for money, and even carrying a toy gun to complete the look of the franchise.

The video had surfaced earlier this year when Mr Depp was fighting a legal battle against his ex-wife Amber Heard. Internet users gave thumbs up to the beggar’s performance and jokingly called him “Johnny debt”. The clip was shared on several social media platforms and on Twitter it garnered nearly 8 million views.