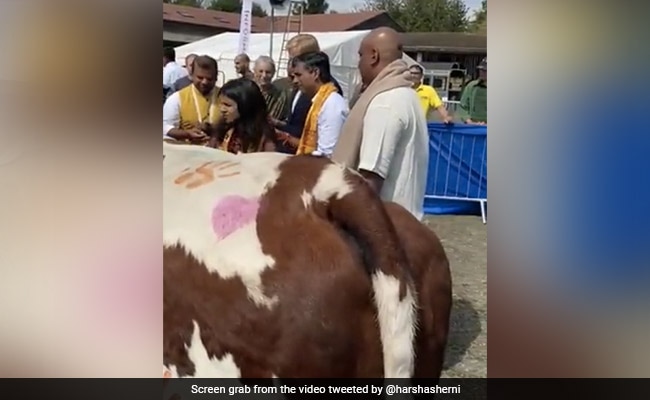 A video of Rishi Sunak, who is a finalist in the race to succeed Boris Johnson as British Prime Minister, is gaining traction on social media that shows the Conservative Party member performing gau pooja (cow worship) in London. The video was shot when the 42-year-old visited a cow enclosure along with his wife Akshata Murthy, the daughter of Infosys founder NR Narayanamurthy. In the video, the couple can be seen standing next to a cow that has been ready for the occasion.

In the beginning of the video, Mr Sunak is seen getting up with a brass vessel in hand after offering the holy water. The priests around the couple then tell them about the next ritual.

That’s our rich cultural heritage we must be proud about.

As the video progresses, both Mr Sunak and his wife are seen performing aarti of the cow, which has been decorated with colors and handprints.

The video of the gau pooja comes days after Mr Sunak visited the Bhaktivedanta Manor on the outskirts of London to celebrate Janmashtami and seek Lord Krishna’s blessings. The manor, on its official Instagram page, said that Mr Sunak talked about the Bhagavad Gita and how it gives him strength.

He also posted some photos from his visit on his official Instagram page.

Mr Sunak had won praises from Indians living in the UK after he celebrated the festival of Diwali in November 2020, during his tenure as chancellor of exchequer. He marked the occasion by lighting oil lamps on the front step of the chancellor’s official residence at 11 Downing Street, while urging others to stick to England’s Covid lockdown.

Mr Sunak had taken oath as Member of UK Parliament holding the Bhagavad Gita when he was re-elected for the third time from Richmond, Yorkshire.

He represents the constituency of Richmond, in northern England – a safe Conservative seat he took over in 2015 from former party leader and foreign secretary William Hague, who described him as “exceptional”.